Author: Les Lynam
Genre: YA Science Fiction (Time-Travel)
Book: …Before You Leap from the Time Will Tell series 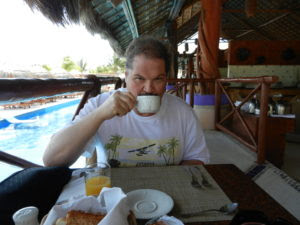 Les Lynam (1954- ) was born in Creston, Iowa, into a farming family which also included an older brother and two older sisters. The family farm was near the tiny community of Corning, Iowa, (birthplace of Johnny Carson). After graduating from Corning High School, he attended Central Missouri State University (renamed University of Central Missouri in 2006), graduating in 1976 with a Bachelor’s degree in Mass Communications. After a short, mostly unsuccessful, attempt at running a print shop, he refocused and returned to a life of studies at the University of Missouri. He received an M.A./M.L.S in 1986 and began a new career as a librarian at Ward Edwards / James C. Kirkpatrick libraries at UCM. He took an early retirement on December 31, 2012 to pursue his lifelong dream of writing Science Fiction. His premier novels, “…Before You Leap” and “…Saves Nine”, were first published in 2014 with hopes and dreams of many more to come. His favorite sub-genre of Science Fiction is Time-Travel, with Martian Colonies a close second. He has one son and three grandchildren. 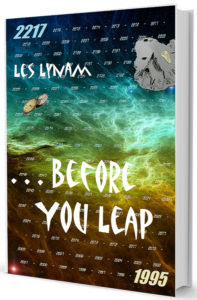 Two teens from two centuries apart, one the direct descendant of the other. Einstein’s Theory didn’t cover THIS relativity.
Sean Kelly considered himself an average 16-year-old, living in an average neighborhood in a small University town. Nothing too exciting ever happened in Grover’s Corners, Missouri; some might even label it boring. His ordinary life was disrupted when a distant relative dropped by at the beginning of his Junior year in high-school. A distant relative from the 23rd Century.

What a terrific combination of science fiction, nostalgia, and just “good ole fun”. Lynam’s graphic depiction of adolescents in the mid-1990’s, and the way he skillfully develops them within his sci-fi theme are masterful. It has been years since I have read a book where I felt so attached to so many characters.
While I don’t consider my well-versed on the “science” of time travel, his depiction seems very rational and logical. I’ll let the time travel experts weigh in on that subject.
This book is so much more than a science fiction book. If you were an adolescent in the 90’s, your heart will be warmed by the authors skillful description of the unique qualities of that generation. If you are not from that generation, Lynam has skillfully depicted how the details of adolescence have changed, but the basic themes are constant. He has done so with respect and well placed humor.
You would be missing a “great read” if you passed on this book because you “are not a science fiction fan”. It is unfair to have to put this book in a category because I believe it appeals to everyone. Historical references are accurate, characters come alive, humor is well placed, and the science fiction is believable.
In his first attempt, Lynam has written a book that exemplifies why a well-written book is so much better than any movie ever made.
I can’t wait for more from him.  — Bryan L. Jackson

At the end of class, Sean was one of the first out the door.  He went as far as the stairs to the main sidewalk and waited at the bottom, exchanging “hey” with a few people as they passed him, then his eyes met Megan’s.  She was chatting with Ashly as they approached.  When she saw Sean, she started to purse her lips.
“I swear, Megan,” Sean growled, “if you do any more air kisses I will smack you!”
Megan unfurled a catlike smile.  “Really, Sean?  Principal’s Office on the second day for hitting a girl?”  They walked past him, laughing as they went up a couple of steps.  “Maybe you can get some real kisses from Alexis,” Megan said over her shoulder.  Ashly giggled.  Sean closed his eyes and imagined Megan’s head exploding.
He waited and watched as nearly everyone from the outside classrooms went up the steps.  The over-achievers were already heading the other way, early for their second class of the day.  At last Alexis appeared.  In the sunlight, Sean could see that she was wearing blue jeans and a simple blue shirt with three-quarter sleeves.  He wondered if the color reflected her mood.  She stepped past him and started up the steps.
“Really, Alexis?” Sean said as he quickly gained the same step that she was on, “today I don’t even exist?”
“Of course you exist,” Alexis stated flatly, still looking straight ahead.
“So yesterday you were stalking me, and today you give me the cold shoulder?”
“My shoulder is the same temperature as…” She stopped abruptly, then continued, “I am making no attempt to ignore you.”
“What do you call it, then?”
“I believe you said, ‘Just dial it back a little, huh?  Maybe more than a little.’”
It took him by surprise.  She had perfectly mimicked his cadence and inflections, almost as if she had recorded him and played it back in her own voice.
“Will you stop a minute?” he demanded.
“I will be late for my next class, as will you,” she said as she maintained her pace.
“Thirty seconds then.”  He grabbed her shoulders and spun her to face him.  “I just don’t want to feel like I’ve ruined your life because I don’t have feelings for you the way that you want.”
“Then you should not,” she stated flatly.  Her face showed no emotions.
“Not what?”
“Not feel like you have ruined my life.  You can select an alternate emotional state.”
“Look, I just want us to be OK,” he insisted, “Can’t we start over and just be friends?”
“Yes, we can be friends, and I have already determined that I must ‘start over.’”
“You have?  Good.”  Sean paused as he examined Alexis’ eyes for any telling signs.  She was silent, and too much silence always made him uncomfortable.  “So… you never know… maybe with a little time… and not rushing anything… you never know,” he babbled as he tried to assemble a coherent sentence.
She smiled.  Nearly a believable smile, but it didn’t reach her eyes.  Sean dropped his hands from her shoulders.
“No, I believe I do know,” she said.  “I have committed numerous mistakes.  Alexis Townsend is not the girl for you, Sean Kelly.”  She turned and started walking to the main building.  Sean fell back into step with her.
“Ummm… OK.  So… all right… friends… and yeah, OK… good talk.”  They entered the building, and Sean started up the steps to his next class.  Alexis remained on the ground floor and started down the hall.  He stopped four steps up and called over the rail.  “Hey, Alexis… um… you know, Raj really does think you’re cute and all… so… you know….”
Alexis looked up to see him shrugging.  “You truly are a fascinating person, Sean Kelly.”
She smiled.  It was a genuine smile this time.
Sean continued up the steps, but called down, “Right… umm… yeah… OK… good talk!” 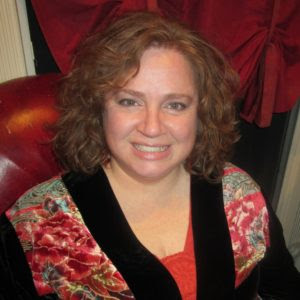 Deidre Mapstone grew up in Rochester, New York. She’s a city girl who spent her summers on Canandaigua Lake. She had the best of both worlds, and a most cheery childhood.
She married her high school sweetheart right out of college, and a few years later started their family. They now have three children, the first to soon attend college.
Being busy raising three children, Deidre didn’t discover writing as an occupation until later. She wrote things throughout her life, but didn’t think she’d ever have anything published. That is, until self publishing came along.
The self publishing world opened up possibilities to Deidre that before, she just thought of as dreams and ideas.
With encouragement from her writing daughter and her husband, Deidre wrote a dream down that spun into a story and blossomed into her first novel, Sigrun, the Bandamann Saga.
She has discovered and fallen in love with the world of writing, and hopes to bring many of her ideas to others! 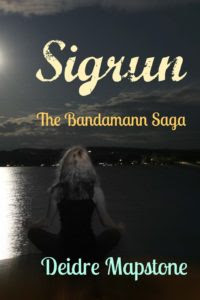 The Lundgrens own and operate Sigrun:
A family restaurant on the shores of Mount Desert Island, Maine. They are a hard working, every day, American family. But like every family, they have their secrets, some stranger than others. The way these secrets unfold may surprise you.
Their tale begins with a familial ease considered unique to most, but their seemingly perfect relationships are ordinary compared to what hides beneath the surface.