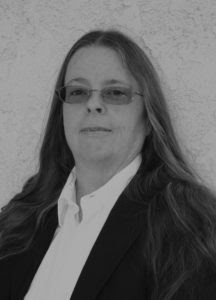 Alex Taylor is the author of the Michael Alexander/Kari Logan vampire series:

Alex is currently working on several projects, including the third and fourth books in the series.

While born and raised in Lompoc, California, a small town much like the one described in The Wannabe Vampire, Alex had the opportunity to travel extensively as a child. In 1977, the family packed up and moved aboard their sailboat, where they spent two years touring the South Pacific.

When not writing vampire stories, Alex enjoys camping, blogging, reading, and playing with parrots. Alex’s first RV was very much like the one Kari owns, but this is a total coincidence. 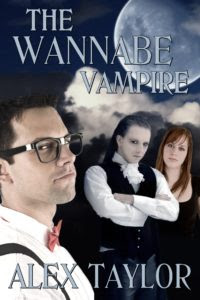 Michael Alexander is not your typical vampire.

He has a house in a small coastal California city, a software development team in Mumbai, and a black Toyota Prius. He wants nothing more than to enjoy the pleasant life he’s crafted for himself and the friendship of Kari, his new next door neighbor.

Unfortunately, Michael also has a stalker.

Bruce is convinced that only the power of a vampire can save him from the ghost that haunts him. After a chance encounter in the grocery store, he turns to Michael for help. When Bruce’s entreaties are rejected, his unstable nature takes over. Trapped between a desperate and deranged man and his fantasies, Michael and Kari are caught in the crossfire.

Kudos to author Alex Thomas for putting together a modern-day tale of a vampire falling in love and NOT ravishing the object of his affections. Good to know there are still some honorable undead left out there. – Vampbard, That’s what I’m Talking About

Ever since he was nine years old, Bruce Thomas wanted to become a vampire. It had started, quite innocently enough, as a game he had once played with his now-dead sister Louise. One night, they attempted to conjure up a ghost. It was Louise’s plan to frighten her younger sibling.

The spirit in question was that of a young woman named Agnes who had been killed in a terrible car accident nearly a century before. One summer night, she had been driving on a lonely, dark stretch of twisting mountain highway. She lost control and plummeted over the sheer cliff. The accident occurred in an era long before safety belt laws and car seats, so her infant daughter was riding unsecured in the front. When the car went over the edge, the child flew out the open passenger-side window and disappeared.

Several increasingly ghastly variations of the tale described the child’s end. In the happiest version, she was rescued, adopted, and raised to adulthood by a well-meaning passer-by. In another, she was found, killed, and consumed by coyotes. In the most ghastly telling, she was impaled on a tree branch and died a lingering death after which crows plucked out her sightless eyes.

However the child died, one thing was certain: Agnes’ desperate spirit regularly walked the lonely stretch of road in a futile search for her lost child. Sometimes, she would appear as a white woman walking along the side of the road, delivering an unhappy end to those who stopped to provide aid. On other nights, she would appear in the form of a white owl that would suddenly fly across a driver’s path, causing an ugly, and often fatal, wreck. No matter her form, unwary travelers risked meeting Agnes’ fate if they encountered her wandering and restless spirit along the road.

On that fateful night, Bruce and his sister huddled in the darkened guest bathroom. Louise handed Bruce her baby doll as bait for the ghost, then knocked three times on the mirror. “Agnes, I’ve got your baby,” she said.

She rapped on the mirror again, pausing for greater effect. “Agnes, I’ve got your baby.”

Finally, after knocking a third time, she shouted, “Agnes, I’ve got your baby!”

Slowly, almost imperceptibly, the face of a woman materialized in the glass. She appeared, greenish and semi-transparent, as a partially decomposed corpse. Her shoulder-length hair seemed to squirm, snake-like, as her hands reached slowly out towards the two mesmerized children.

Suddenly, the spell was broken. The two children exploded from the bathroom and spilled into the well-lit hallway. Once they had escaped, Bruce burst into tears. His sister, breathless, started to laugh. During the commotion, Bruce had wet his pants.

Although Louise soon forgot about the incident, the fright and the shame of that night never left Bruce. He had been the one to hold Agnes’ baby; her revenge was that she began to visit him in his dreams. At first, she would replay the terrifying details of her accident. Later, she began to show him her wicked hauntings of innocent travelers.

As a result of Agnes’ torment, Bruce developed a bed-wetting problem. The poor boy, too terrified to leave his bed and venture down the hall, would urinate in the quiet comfort of his warm sheets, much to the consternation of his parents and the ridicule and delight of his elder sister.

As Bruce grew, Agnes’ visits became more frequent and frightening. No longer did she confine herself to his dreams. He would see her when fully awake, as she prowled across his moonlit room sharing her gruesome tales. At night, he would scream; during the day, his parents sought advice from doctors, therapists, and even clergy.

By the time Bruce reached puberty, Agnes was his frequent companion. Although her visits were still frightening, she had stopped her nightly show of horrors. Instead, she promised to become his lover and would ask him to do small favors to prove his devotion.

At first, these things were harmless — a bouquet of wildflowers placed on an old grave in the cemetery, a shot of his father’s whiskey left out on the porch for a passing spirit. Later, she began to ask him for terrible, unspeakable things. She asked him to decapitate the neighbor’s cat and to loosen the lug bolts on his sister’s car to disastrous result. If he refused, she would cajole and threaten until at last he acquiesced. Bruce was powerless to resist.

Despite the efforts of all the professionals involved in his case, Bruce was not saved by the multitude of medications prescribed by his doctors and researched by his frantic parents. Invariably, each drug would put Agnes’ visits on temporary hiatus, only for her to return, angrier than ever, a few weeks or months later.

Although the medications did not give Bruce any relief, he was able to find some respite by losing himself in tales of the macabre. He obsessively collected horror magazines, books, and movies, because he found these stories oddly comforting. Observing the suffering of others plagued by the unholy machinations of ghosts, spirits and monsters somehow made him feel less alone.

As he began to read stories of the spirit world, he soon learned there was only one creature immune to their effects. Vampires, he realized, were unaffected by ghostly movements and demands.

To escape Agnes’ grasp, Bruce knew he must one day become a vampire. His difficulty in executing this plan was that he needed to find one to help him complete his transformation. Much to his dismay, he discovered vampires were a rarer breed than his vast media collection would suggest. At almost 50 years old, despite decades of trying, he had yet to meet even one.

See the Brain to Books Blog Tour Giveaways with Lu!

A Brain to Books Production