Quick question before I launch into the intro for Sara…..does anyone here have any experience formatting e-books properly? I Want to add mine to the Smashwords catalog, but they say it’s not formatted right. Getting very frustrating, especially since I have to commandeer my friend’s computer to work on it! Rather get help from someone who enjoys my writing than from some random guy I don’t know.

Okay, that’s enough complaining for the day. Feeling much better, just a bit of a tickle left in the back of the throat. Should be back to our normal posting routines now that we’ve kicked the crap! So, without further ado, I give you the woman of the hour. My lovely wife, Sara!

Been sick for far too long for my liking. I’m doing much better, wasn’t able to think clearly at all for several days among other things, was also clumsier than usual too. Weather is getting colder, so I followed suit and switched out the rest of my summer clothes for long sleeves and thicker fabrics, switching out colors in the process. Been looking stuff up, the trending colors for this season and month so far have been pink (all shades), strong cobalt blues,teal, emerald greens and woodsy browns, deep wine reds and berries, also leather and lace of varying colors have been popular too. Metallics are having a Big moment in clothes and makeup. These are the following trending metals, rose gold, silver ( bright, antique) bright gold,and I think copper too.

Woot! Seahawks play Sunday at 10am!! I might put up a game day makeup look before game starts or after if I’m running late. 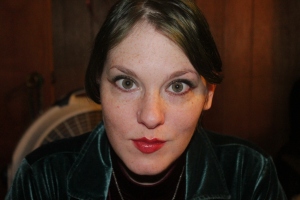 After washing face and plucking eyebrows, I first applied a light wash of the pale green found in the bottom triangle of Rimmel’s Glam’eyes trio eyeshadow in Tempting. It went on browbone , crease , not on lids. On eyelids I used two colors from Milani’s Autumn Earth eyeshadow quad. Used the green in a few layers, turning up the saturation level. I then chose the red to line under bottom lashes and to line top eyelashes, flicking out past top lashline for a personal touch on the cat’s eye look. Finished eyes by using Maybelline’s Great Lash mascara in Blackest Black on both top and lower lashes. For lips, a well blotted stain of Milani’s Bonfire lipstick, with a sheer glossy layer of Covergirl’s Blackberry Splash Wetslicks fruit spritzers.

Swirls of reds and greens

A mixture of greens, reds, cranberries, with leaves,clear drops, stripes of black rainbow patina and the gray cylinders are hematite.

Painted half of each nail using Revlon’s Rain Forest Colorstay Longwear nail enamel in the usual two coats. On the other side after the green’s dried, I applied a bright red,NYC Long Wearing Nail Enamel’s Broadway Burgundy Frost used three coats for a more saturated hue. Went over minor mistakes with a third coat of Rain Forest. I really like the pairing of these two similarly glittered colors. They both feature tiny specks and flecks of glitter that contrast with base color,are big enough to empart some sparkle and small enough to not look “cluttered” and easily comes off.

Here’s a close up of the colors.

Here’s two of the trees I’ve made out of wire and various types of beads. 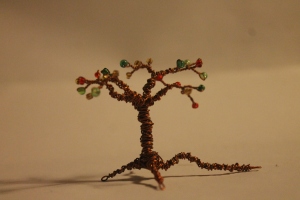 Tree is modeled after those viewed during autumn. 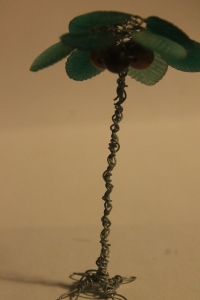 This one is inspired by palm trees and a summer breeze, there’s even some coconuts hidden under the leaves. Both trees stand on their own.

Another five pounds this week! I used to think finding a way to workout on my sore back would be the hardest to accomplish. It’s not! The thing that’s the hardest is watching others eat refined sugar! And then I came to a realization. Sugar is a drug! It gets you high, people are irritable if they don’t have it, and I know people that will do just about anything to sugar. Hell, from looking at this picture, it may well be more addictive than cocaine! Chew on that for a moment.

And the problem with 3/4 of the fat free foods, is they replace the fat with sugar!

Another amazing seed! These are extremely healthy for you, and recommended for any life style, once you acquire the taste.

The chia seeds big little brother! Has a almost nutty taste. *WARNING* Can be an acquired taste. I found eating the seeds like already shelled sunflower seeds the easiest.

Complete protein! Good for vegans in search of protein. Chia is a more complete one. Try mixing the two for snacks!

Great sourse of fiber, b-6, and omega 3 fatty acids! Its greatest advantage over the chia seed, it has vitamins!

Acquired taste! If you grew up eating american food, you WILL face an adjustment eating these. However, the health benefits out weigh the taste.

Not good to soak, like chia! While the seeds do swell at a 3-1 ratio, they aren’t really that good for adding to desserts or things of that nature. Should stick to this in breads, crackers, and raw.

If you do eat these raw, you need to chew them up very finely. The shells really need to be broken down to receive the benefit.

1 cup juice, I prefer home made

Combine in a bowl, mix well. Place on wax paper lined baking sheet. Bake in the oven on 350 for 15 mins. Made a nice sweet cracker, but this recipe is easy to experiment with. Add garlic and salt while replacing the juice with water. The key is using the flax and chia like concrete to hold the food together.

Been trying to think of what I’m going to do, now that I’ve posted my book up. Probably keep going on the GTA story here, and maybe introduce a health conscious thing. I mean, I have lost 110 lbs in just a year. But today isn’t about me, it’s Sara’s Weekly Whatever! I’ll move to the side, so the star can enter stage left.

I’m Far, far from being a ‘star’. I’m just a person, no need to glorify what isn’t there.(She’s blinded and doesn’t see it!)

I was inspired by my socks. They’re cheetah print over neon green, pink, and blue.
I paired them and the bracelets with a long sleeved chartreuse green shirt and black slacks.

I was bored and started to play around with a blue color called Candid Cameron, its Nicole by Opi Modern Family Collection. I used Supershine Naturistics in Peach Bum for the throat of the flower. For the leaf and stem, I used two greens that I mixed.

You can click on the images for bigger pictures!

Not a traditional publisher…but still. I finally found a good place to put it up for free. Want to offer it to people, so I can get reviews and such without too many problems. https://www.smashwords.com/books/view/476522 Download the Epub, the others need to be updated, and the formatting is being annoying >.>

Now…I have to figure out what I’m going to be putting here. Maybe I’ll start doing some flash fiction or something. Anyways, I hope you all enjoy! And as always, feel free to leave any feedback! Preferably on the book page! Or you can always post it to my Amazon page.
http://www.amazon.com/Breath-Titans-Little-Black-Stormcloud-ebook/dp/B00MD1GI3W

Have a wonderful week guys!

God I love having a woman that watches football. Too bad our beloved Seahawks were beaten by the Chargers. I have to give it to Phillip and Gates, they tore us apart! Anyways, here’s the lady you all really want to see, I know I’m just in the way here.

They love you , it’s just I’m a reluctant blogger, eager to show off my home team pride!~SLW~

I used Hard Candy’s Fiberized Lash Weave Mascara in Lush
Green tinting my eyebrows for a subtle look and on my eyelashes. Part below eyebrow I layered the dark moss green over the pale green,both found in Rimmel’s Glam’eyes: Tempting. Eyelid: colored whole area with Maybelline Roller color in Skate ‘Til Midnight. Its a deep dark blue powder.I then applied over that in Covergirl’s Aqua Paradise. I repeated the same lining the bottom part. Lips: light use of Milani’s Black Cherry lipstick, I then applied a light layer of Covergirl’s Wetslicks Fruit Spritzers Blackberry Splash.

These four I made last season, wore them most games, plan to keep wearing them for the rest of this season, might make more to add. 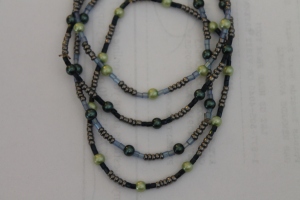 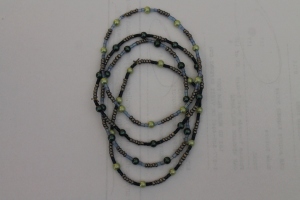 First used two layers of Pure Ice’s Lucky Charming over full nail, I then applied two layers of Rimmel’s 60 Seconds Vinyl Shine :Denim Dreams on the tips. The colors are a very close match to the Seahawks’ colors. 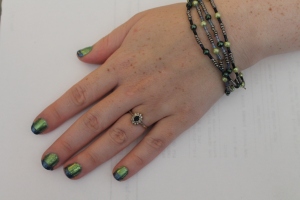